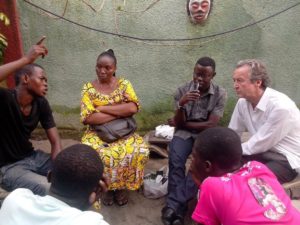 Between August 2012 and January 2016, Lukas Pairon did fieldwork for his PhD-research in Kinshasa, DRCongo, on possible social impacts of music making (SIMM) for young people who were previously members of violent gangs or so-called ‘witch’-children living in the streets of the city.

In 2022 he gave a TEDx-talk during which he shortly touches on the main finding of his research (you can find his TEDx-talk here).

Following his PhD, Lukas Pairon wrote a book (in English) for practitioners (musicians and social and community workers) and researchers interested in finding out what we can learn from the case-studies of music in social work in Kinshasa (DR Congo). Preface to his book is written by Professor John Sloboda. The hardcover version of the book is published by Routledge and is – together with the eBook-version –  released in June 2020 (see link here). The paperback version of the book was released in 2022 (ISBN: 9780367500184). And here are some first endorsements on the book:

It has been a notable feature of Pairon’s approach to his research that it has been conducted with and for his participants. Their voices are so vivid, brought to life with a plethora of detailed quotes that one can almost feel present in the room as they make and discuss their music. In this way, the book is also a tribute to the persistence, engagement and courage of the people in these projects, who can be proud that their work is now exposed to a global audience, not just of researchers but also to practitioners round the world who could learn from and be inspired by these hitherto unknown projects. Accordingly, the language of this book is accessible and non-technical to promote maximum engagement.  (John Sloboda, Research Professor, Guildhall School of Music & Drama, London, UK)

Lukas Pairon has given us an exhilarating and incisive read, in which he systematically dismantles the many myths that glorify notions of music’s ‘magical powers’ to change lives; replacing them instead with insightful, analytical assessments, allowing the voices of the participant musicians themselves to be heard in more ways than one. Through the process, he powerfully demonstrates how music can realistically change people’s lives: in ways that are both limited but also profound. The book is very moving, but never sentimental: one of the best accounts of music’s real transformative capacities that I have come across. (Lucy Green, Emerita Professor of Music Education, UCL Institute of Education, London, UK)

I want to congratulate Lukas Pairon on this important work. It is very beautifully but objectively written. No overt speculation, which makes the case even stronger. (pianist Saleem Ashkar – www.saleemashkar.com)

Music Saved Them They Say

PhD-research for the University of Ghent (doctoral program Department of Political and Social Sciences, Conflict Research Group), in collaboration with and with the support of the School of Arts (University College of Ghent)

supervisor: Prof. Koen Vlassenroot (head of the Conflict Research Group, a multidisciplinary research unit at the Faculty of Political and Social Sciences of the University of Ghent – www.psw.ugent.be/crg)

This PhD-research is interested in understanding how the experience of structured musical practice and education can have an influence on the lives of young people in the difficult living conditions of Kinshasa. The young musicians who have participated in this research come out of complicated social backgrounds – young adult men who were members of violent gangs, and young adult men and women who were as so-called ‘witch’-children living in the streets of Kinshasa. They all believe that their becoming musicians has played an important role in (re-)constructing their lives, and express this by telling us that they were “saved by music”.

What is the significance of music making proposed as part of social music projects to young people in the poverty-stricken and often violent surroundings of Kinshasa?

A qualitative approach is taken, closely following several case studies in Kinshasa (DR Congo) of young musicians (17 to 41 years old) who report that important social changes happened in their lives thanks to their study and practice of music. The main research tools of this PhD are semi-structured individual interviews and focus groups, as well as participative observation. The fieldwork was spread over a period of four years, with preliminary interviews in 2012 and 2013 (one month), and then six times one month of fieldwork in 2014 and in 2015. The data include transcriptions of a total of up to 160 hours of interviews.

An article shortly presenting this research can be found here (in Dutch) and here (in French).

We use cookies to ensure that we give you the best experience on our website. If you continue to use this site we will assume that you are happy with it.Ok